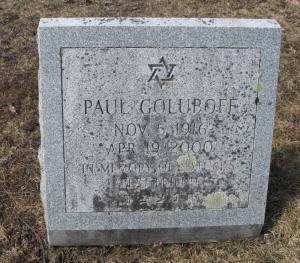 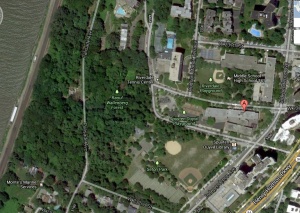 Riverdale begins at the southern end of those high hills, at the northern end of the toll bridge. For $4.00 (which was 10 cents in the 1950s, then 25 cents, then….etc) you cross high above a narrow body of water where the East River going west broadsides the Hudson River going south. The Dutch called this New York argument the Spuyten Duyvil—-spouting devil. The commute from Manhattan to the Bronx must have been somewhat more challenging though considerably less expensive before the bridge left the wind and unpredictable tides far below.

Here the uber urban Westside Highway turns into the bucolic Henry Hudson Parkway and promises Westchester, Putnam, and Dutchess counties.  And, after it becomes the Taconic State Parkway a few miles north at the Hawthorn Circle, FDR’s Hyde Park and even Vermont come into the mind’s eye.

A mile or so south of the toll bridge Washington escaped the British after losing the battle of Long Island. He crossed the East River to Manhattan just ahead of the Redcoats, and made his way north up hill and down dale. This was before Governor Clinton flattened the place to impose New York’s grid system of streets and avenues. When the General reached the point where they would one day build a bridge between New York and the rest of America he was rowed across to New Jersey to live and fight again at White Plains. He left behind fist-shaking Brits and his good name, Washington Heights.

North of the Bridge, a few hundred years later, Louie Wexler played basketball shirtless in the schoolyard of P.S. 24 to show off his burgeoning teenage muscles. Joe Horn threw orange Spaldings at a velocity that made you cry real tears if it hit your arm playing stickball. And Steve Roth dealt 5 and 7-card-draw poker (5-10¢ bets) to all of us on Saturday nights at his parents’ house. This was, of course, before girls.

We are in Riverdale, the Bronx, which was very unlike the Bronx.

Those hills are only a block or two west of the Henry Hudson Parkway, away from the new red brick apartment buildings that line either side of the highway in an unapologetic display of architectural mediocrity—-with their faux English names (The Briarcliff, etc) and never used balconies. Now you are in green woodland that rolls down to the river. Cover the railroad tracks at the bottom with your hand and from the river it probably looks much as it did to Henry Hudson in 1609.

Substantial houses and estates of the rich and great, including Toscanini’s, gradually appear out of their leafy privacy. Arturo Toscanini, the conductor of the Metropolitan Opera (and the New York Philharmonic and the NBC Orchestra), was famous for enthusiastically accepting the orchestra’s gift of a gold watch on his birthday, then, minutes later, smashing it to pieces at the quality of their rehearsal. The emotional Maestro kept excellent time but couldn’t tell you it.

The New York Central tracks run along the river until they turn west to take the 20th Century Limited to Chicago. But that was in the 20th century. Remember Cary Grant and Eva Marie Saint in North By Northwest? That’s the train.

Of infinitely more importance: trains of far lesser renown stopped first at Harmon-on-the-Hudson where the electric engines were exchanged for steam. Then, passing West Point and Bear Mountain on the left, to Cold Spring, where we got off to spend halcyon summers in camp, summers that that came with their own fireworks as instant storms rolled in high above the river, wind rattling windows, lightning making the day into momentary day, while the old Dutch settlers played thunderous bowls high in Dutch heaven. Welcome to the Catskills.

Apart from being a switching yard, two other important things made Harmon special.

The Ice Cream man got on the train. And an engineer with a blue and white striped cap let you climb up onto the locomotive where he opened the fire box to so you could feel the heat burn your face, and allowed you to pull the cord and blow that lonesome whistle.

The thrill of being a whistle-blower in the Age of Steam.

When we weren’t playing basketball or stick ball in the schoolyard of PS 24, we were putting pennies on the tracks below just before and trains rushed by, flattening them.

Occasionally, training for a future Viet Nam, we would throw cherry bombs at the trains.

Newly built, P.S. 24 was for little kids, grades 1-6. The schoolyard had a playground for the smallest, sandbox and all, beyond the last basketball court where we played. There was a small green wooden building which housed equipment. It was also the headquarters of the park attendant or “parky”.

Our parky was Paul Goluboff. Tall and rail thin, he was not young, but not old like our parents. He seemed weathered, tempered by time, but undefined by it. He was not muscular, but he had sinew, physical and moral. There was something about him that made you think that, like Lincoln, you wouldn’t want to call him out or see him mad. In a stiff wind he might bend but never break. If you had any rails around, you felt for sure he’d know how to swing an axe and split them.

But mad was the last thing he ever seemed to get.

In his green New York City Parks Department uniform he rode his bike to and from the playground. I can’t imagine him in a car, much less owning won. He was always outdoors, as his face showed. He was a vegetarian, and brought his bagged lunch every day. He knew the birds and their calls. He grew plants you could eat and he did. He was a Buddhist, which was like a religion but wasn’t. I later came to think it meant being entirely at peace and comfortable with the world, who you are and what you do.

Being comfortable in your own skin is a cliché until you see someone who is.

He never tried to be one of us. I don’t remember him picking up a basketball except to retrieve the occasional one when it ran away down the hill. He never raised his voice. While we were in a hurry to grow up, he was never in a hurry about anything. He never admonished us for being too loud, too rough or too anything as we tried our damnedest every day to be bolder and older.

Maybe it was the river, but later it occurred to me he was like Pete Seeger, if Pete Seeger had chosen to spend his life in a faded olive green uniform working for the parks department and happy in his privacy.

Like Seeger, he was one of those totally human people we all wish we met more of, but never have; people who take comfort in limits. Because their ambition is less, not more. They find contentment in calm. They should have had him hauled before the House Un-American Activities Committee for that un-American attitude alone.

And if it ever turned out Paul Goluboff had sung with the Weavers, I wouldn’t be surprised.